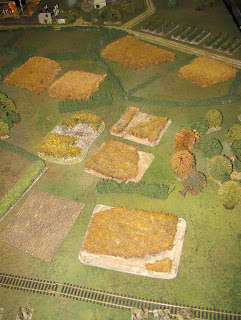 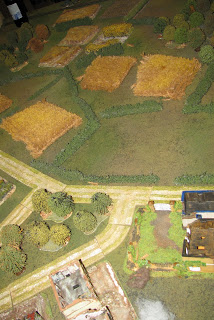 Operation Bluecoat was another British attempt to break the deadlock along the Normandy front. The Americas had launch operation Cobra to the south east and the British were pushing up to put more pressure on the German line. Our game is based on the assault on the village of Sept Vents at the start of Bluecoat.

Von Dax and myself were doing our best with the 'orrible hun, while the doughty British were commanded by Major 'Jimbo' Loutitt and Corporal 'Old Soak' Hodge. The Germans deployed hidden with a large lump of nazi fiendishness, carefully placing their mines and machine guns. 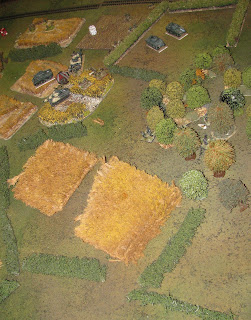 So to the tale, after a long round of tea drinking, discussing the weather and the finer points of middle and leg, our British commanders got the troops rolling. Major Loutitt, obsessed with maintaining the proper formation of an echeloned attack, could be heard over the radio waves telling anyone who would listen. Corporal Hodge did not looked too interested busy as he was checking the beer in his knapsack. 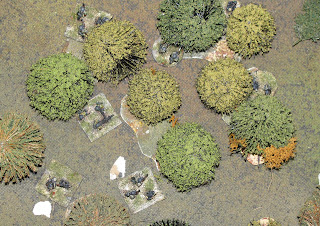 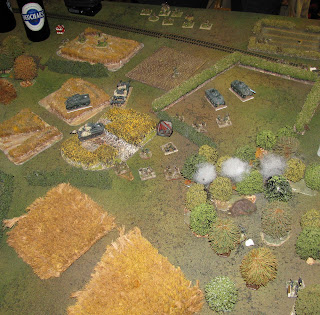 The lead scouts, on the left of the British advance spotted some fresh faced Nazis in the next field. After arranging his troops into some kind of thin brown line, a mass of fire pored forth pinning half of the Nazis. The remainder opened up and then legged it back to the next field, deserting their pinned comrades. Major Loutitt leapt over the hedge followed by the rest of the company, 'Take that sausage eater!' drifted back over the hedge rows. The 8 or so Hitler youth were massacred in the bottom of their scrapes as the major leapt about shouting obscenities, empting his Webley.

Back to his old theme, the Major halted his company in the ex-Nazi positions to get his echelon back into shape. He had however fallen into a feindish Nazi trap, the blighters had pre registered their artillery on their hastely vacated positions. Resting his boot on the blond locks of the master race, Major Loutitt looked rather shocked with the whine of the approaching shells. Von Dax could be observed rubbing his hands with glee as the whole British company was bracketed, the Majors use of obscenities reach new levels. 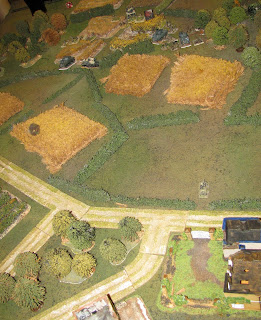 As the Major's company was grovelling in the dirt trying to escape the fiendish Nazi trap, Corporal Hodges lot pushed forward. The more professional approach was paying off as a bit of spotting followed by fire and movement gained ground. True to form, more fiendishness was in store and a hidden MG put a staccatoed end to proceddings. The Corporal watched in horror as the devilish Hun pinned his mates in an open field. Fortunately a British tank boy was on hand and soon put paid to the MG's fun and the advance pushed up to the hedge by the sunken road. 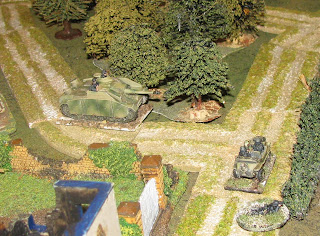 After a brief pause behind the hedge Corporal Hodge and his men vaulted over the hedge and straight into a minefield. It would seem however that the German mines were faulty, probably manufactured in some French factory, and the British troops raced through with no casualties. A burst of Spandau fire and the sound of breaking glass brought disaster to Corporal Hodge, his precious beer was gone. Fighting mad, he stormed the Nazis position, which turned out to contain a full platoon, in a bloody encounter the corporal bayoneted every Nazi he could get his hands on. The remainder broke and ran leaving the British holding the position. VC all round was the cry, at which point the battle drew to a close. 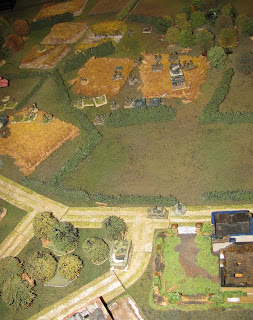 While the Germans were not beaten the momentum was most definitely with the British. It was a good fun game with Corporal Hodges charge at the end being the highlight.
Posted by Dougie