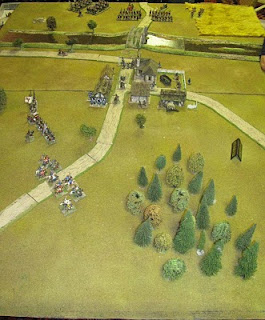 This game was one that I thought up on wet Wednesday lunch time. The premise is that the Prussians are defending a river line and have a scattering of outposts holding the key bridges. The Russians had got a small detachment over the river by a ford to the north of the bridge and had circled round behind one of the said outposts. The Russian plan was to attack the outpost from the rear while launching a direct assault on the bridge. The local Prussian forces had however gotten wind of this and a relief column had been dispatched.

The Russian forces consisted of 2 battalions of Infantry, 1 unit of Cossacks and 1 gun on the Prussian side of the river. 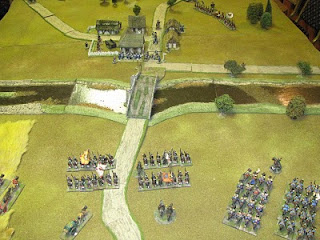 4 battalions of Infantry, 2 Cavalry Regiment and 2 Guns trying to force the bridge.

The Prussians had 2 Frikorps battalions, 1 unit of Jager and 1 gun in the village and a relief column consisted of 4 battalions of infantry, 1 unit of cavalry and 1 gun. 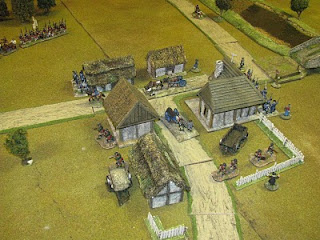 The initial moves saw the Russian forces move forward to the edge of the village in preparation to assault. Russian forces on the other side of the river launched a mad rush at the bridge, speed was essential.

The Prussian relief force pushed on up the table led by the von Sezkely Hussars. The cossaks covering the flank of the infantry assault on the village turned to face the Hussars. In the ensuing melee the Cossacks were trounced and sent scurrying back behind their lines.

The Infantry had moved into assault positions around the edge of the village and launched a charge due to some great dice a double 6 to be precise the Frikorps rabble beat off 2 Russian Infantry battalions. 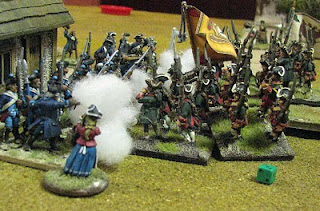 crossing and then failed in its bid to charge the defending Frikorps battalion. Flushed with success the Frikorps sallied to hit the fleeing Russians but failed its charge roll and fled back down the bank of the river.

The battalion behind it stormed the gun on the road and then pushed on into the village capturing the building behind the Frikorps. The Prussian relief column had by this time had reached the middle of the village.

We had run out of time by this point which was unfortunate as the game was getting interesting with some heavy fighting in prospect for possession of the village. The Russian Cavalry had crossed the river to the north of the bridge and were now in a position to intervene in the fighting. The initial Russian attacks on the village had not been successful but with a small foothold in the village at the bridge they would be difficult for the Prussians to dislodge. 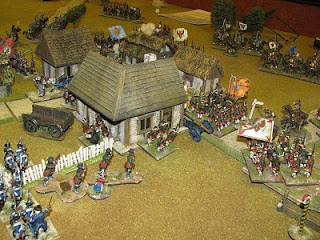 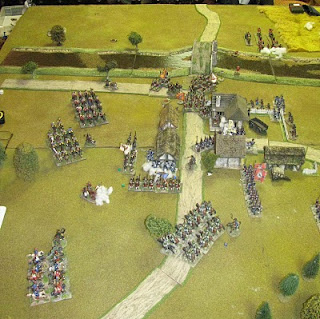