Pics Of some old figures 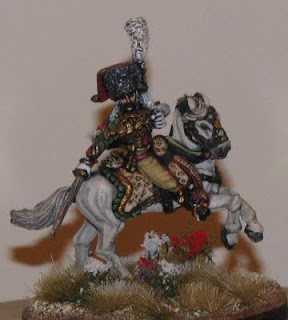 An officer of Napoleons Guard Chasseurs a cheval 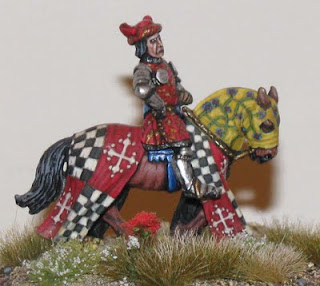 This serious looking chap is the only figure I painted up for my Pisa army for the condottieri period of Italian History. It is something I have always meant to do but there always seems to be something else pushing to the front of the painting queue. 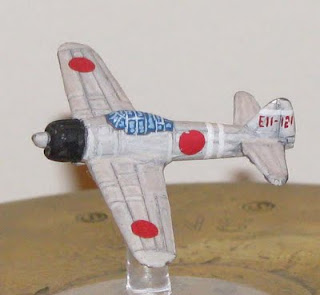 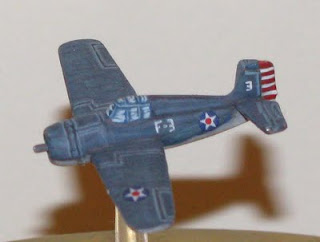 A couple of planes from Dom's Decals.
Posted by Dougie No comments:

I am presently painting up a load of French command for my napoleonics and I thought I would post a few pics.
Posted by Dougie No comments:

This fictitious engagement was inspired by a Charles Grant scenario concerning a flank attack. The defenders, in this case the Allied armies of Britain and Spain have left their left flank hanging in the air and the dastardly French have sniffed an opportunity and are looking to exploit. 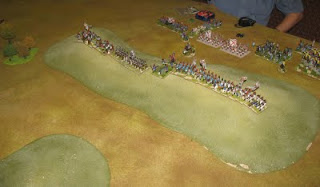 Two brigades of John Glass's Spanish infantry set up along the ridge line running down the centre of the table. One brigade of infantry and brigade of cavalry held in reserve behind the ridge. The British under John Perkins are deployed off table to the north and consist of three brigades of infantry and a cavalry brigade, these will drip feed on as the game progresses.

The French forces consist of two infantry divisions, each of two brigades and a brigade of cavalry supplied by myself and Dax. One infantry division and the cavalry are facing off against the Spanish while the other infantry division, commanded by Brian Phillips, is approaching from the flank. 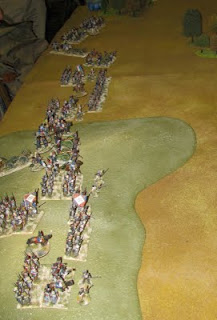 The battle started with Brian's Division rolling on, or not as poor dice led to a rather lacklustre start with only one brigade appearing and creeping on at that. The forces facing the Spanish started a rather ineffectual bombardment of the Spanish line. On turn two Brian's troops were still flapping about on the flank so I launched one brigade to attack the opposite end of the Spanish line. This did not quite go to plan, a blunder on the command dice led to their speedy disappearance from the board. With the arrival of John's British on this flank things were not looking so hot for the French. 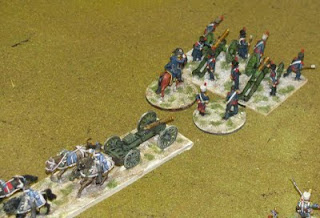 Drastic times call for drastic measures, John Glass's Cavalry had moved round to the flank and were threatening to stop the flank attack before it had even begun. French light cavalry generals are not adverse to madcap charges and in the spirit of Brigadier Gerard, 'en avant!' The Dice throw hurled the 2nd Hussars and the 5th Chasseurs a Chevel across the width of the table, unfortunately however they were about 6 inches short of their target and John's eyes lit up as he unlimbered his guns. 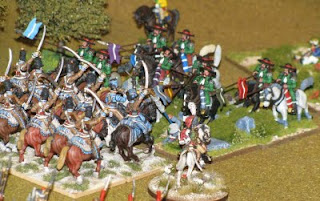 The 5th Chasseurs a Cheval were smashed and broken by the guns and the 2nd Hussars were disordered. The Spanish cavalry seeing the opportunity charged home against the Hussars. The 2nd seem to preform best in adversity and destroyed the lead unit and caused the second on to retire. Seeing as this was the second game in a row that they had done this, John did not seem best pleased.

Amazingly Brian's troops had made a stunning appearance and swept across the board to engage the Spanish flank and my disappearing brigade of infantry reappeared back in their old position. The main French attack now gathered pace as Brian broke battalion after battalion on his push across the ridge the Spanish tried to reform the line but with little success. All eyes turn towards the British what would they do to save the day. 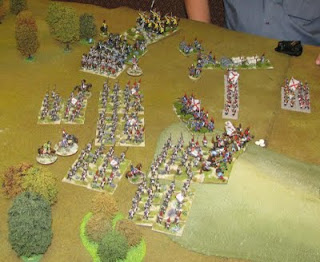 Not a lot, the British had spent their time securing the other end of the Spanish line. One unit of heavy dragoons had positioned themselves behind the Spanish lines but the fleeing Spaniards got in their way. Two of the British brigades had not managed to make it on by the end.

All agreed that it was an convincing French victory, the Spanish line was shattered and the British would pull back to form up alongside their intact brigades off table. It was a good game using Blackpowder which as always lets you get to a conclusion in a club night. 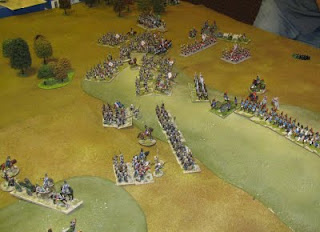