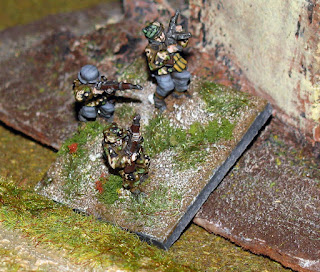 Flanking Metz Patton never one to let fuel shortages get in the way had bounced the Mosselle to the south of Metz in a bid to encircle the city. The 5th US infantry division was tasked with enlarging its bridgehead at Arnaville (a previous game) to allow the 7th armoured division to push on through and this was the excuse for our game. 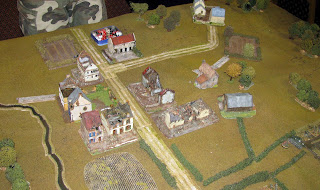 This is the village of Lorry to the southwest of Arnaville. A small kampfgruppe of the 17th SS are holding the town in reduced company strength with a couple of StuG IV in support. The American task force consist of an infantry company and 3 shermans. The objective is to secure the village. The Germans have a counter attacking element, 1 mechanised infantry platoon, released after the Americans have captured one building. 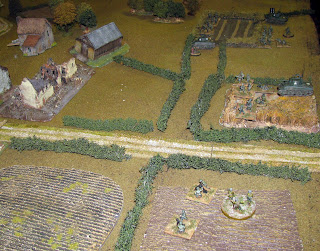 The Americans chose to break up their command into 3 groups of 1 infantry platoon and 1 tank. The plan was to screen the village with 1 group while flanking it with another keeping the last in reserve. The Germans were allowed 2 stands in front of the village and the StuGs were to be placed in the last quater of the table with the infantry in the middle. They were allowed 1 ambush unit. 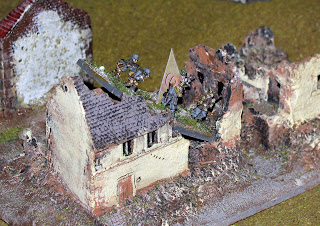 The first few turns were uneventful as the Americans moved on, spotting was done but the nazis were lying low. As the yanks were lining up to rush the wood on the hill, to the south of the town, the first sparks of resistance were ignited. A concealed StuG forced one of the advancing Shermans  to retire and Germans had been spotted at the fringes of the town. 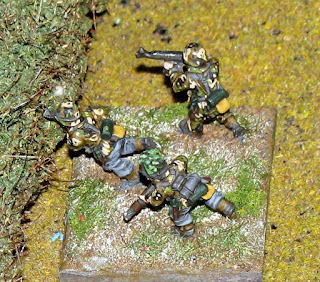 The rush up to the wood was causing a small amount of concern.  A squad was sent forward to see what was up there with no reaction the rest toddled up only for the  Germans to  unveiled a platoon which raked their flak. The battered troops went to ground as we scrambled to see what we could do them.  Thankfully the germans were content to be passive and we had soon established a base of fire on the hill. 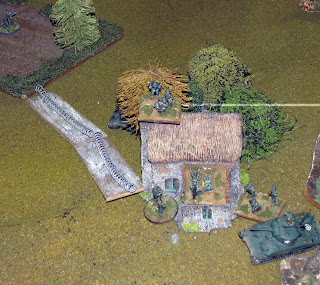 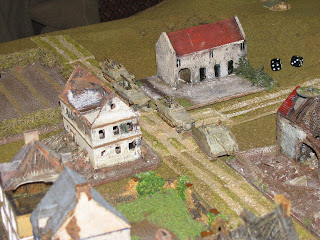 It was decided to move the reserve platoon up and through the position into the town.  Meanwhile yanks facing the town were having fun hosing any kraut they could see. Soon the edge of the town was clear as the defenders had withdrawn from the fringes. The yanks soon occupied a few of the buildings this however triggered the German reinforcements which came on down the road. The one Sherman had manoeuvred to cover the road but this revealed another StuG looking straight down the road good American gunnery soon started winning that fight.

The Americans were now poised to storm the rest of the village the game was drawing to a close and it was clear team nazi didn't have much hope of holding on. The StuG would have been able to cover the withdrawal without too much risk to themselves.  On a side note the Americans didn't lose a stand while the Germans were down 6 stands of infantry. 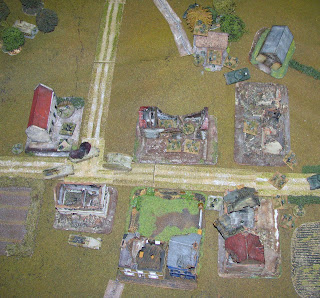