Having failed in his attempt to secure an escape route to the south after the debacle of Moscow, Napoleon was faced with heading back down the route from which he came. As the French forces headed west along the route from Moscow to Smolensk, the rearguard, consisting of Davout's 1st corps took up successive covering positions. 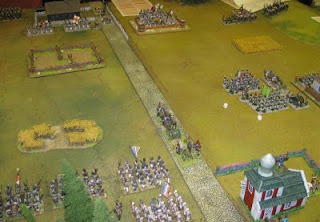 The Russian commander Miloradovich realised that an opportunity existed to cut off Davout's corps. As the cossacks demonstrated in front of the main position 2 cavalry crops slipped round the southern flank and cut across the French line of retreat.

Our game starts at this point, however the Russians in our scenario had managed to throw up a redoubt, install a couple of heavy guns and get 1 infantry brigade into position across the line of retreat and 2 cavalry brigades. 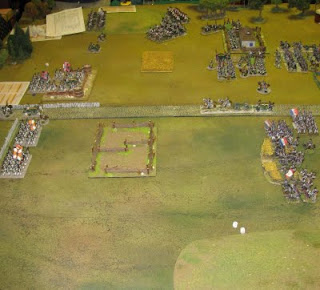 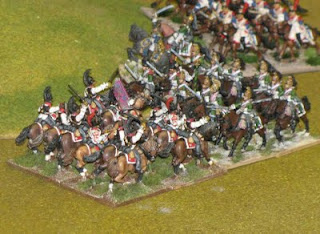 The French plan was to pin the left flank while assaulting the redoubt with the bulk of the force on the right. Speed was key before the Russian flanking forces could put the squeeze on. The initial moves saw a rather lacklustre French advance, Dave Marks and Ian Gale got some bad ice. The French poured on from turn 2, the Infantry made a rapid advance on the left, while the heavy cavalry swept round the right flank to face the Russian heavy cavalry brigade.

A sharp charge by the Russian Cuirassier smashed the dragoon regiment and left the Cuirassier shaken before retiring. The French were in a bad way with heavy cavalry to the front and a table edge filling up with cossacks. In the ensuing 5 turns the French Cuirassier were subject to repeated charges first from cossacks and then Cuirassiers, with some lucky dice throwing and a fortuitous misreading of the rules they fought them all off. Finally they retired back behind the supporting cavalry on the last turn of the game. 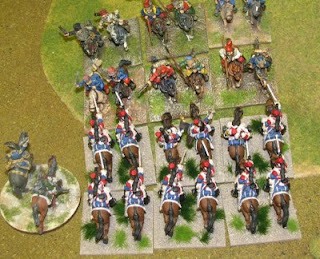 The main French assault was not quite taking shape as expected. The right hand column had stalled in front of the redoubt while the left was forging ahead and preparing to assault the 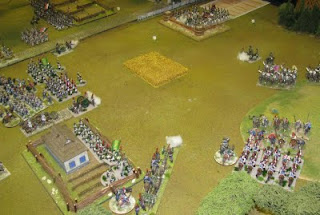 Russian line. In a desperate attempt to get the assault on the redoubt moving, the support brigade was leapfrogged through. 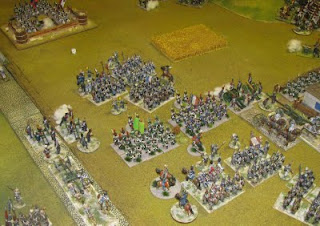 Dave's battalions on the left began assaulting the Russian lines. In two rather disastrous turns, 3 battalions were wiped out and the forth was just about surrounded. The supporting brigade was hurried forward but with Russian infantry appearing on the flank things were not looking good. 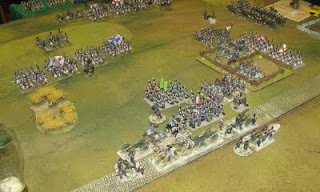 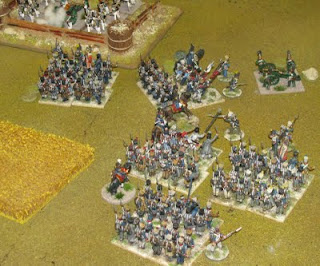 into charge range. Some rather unlucky command dice left the brigade just short and a round of fire left it broken. Any hope of escape was now gone and victory was conceded to the Russians.

It was a fast and enjoyable game with blackpowder. While the rules do not provide all the nuances for the grizzled Napoleonic commander they do give you a result in the tight time constraints of a game night. 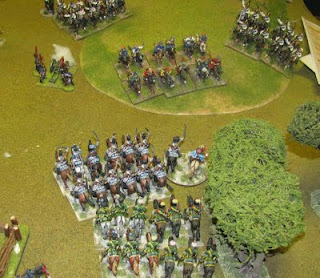