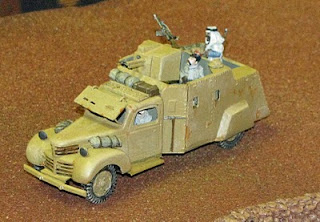 Colin Jack does not do world war 2 in anything but style. Vichy France vs the Dominions plus a few commandos. I had plumbed for the Vichy side as the allies already had the dastardly Mr Jack and his sinister accomplice 'Ray.' The rules we were using were triumph and tragedy an interesting set with some quirks.

The sinister 'Ray' was seen conversing with the dastardly Jack before the game and I could tell an evil plot was in its infancy. Planning in a wargame, have they no sense of honour. 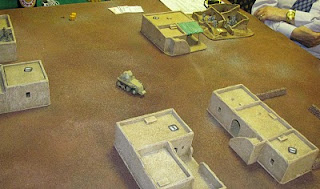 The game was a simple grab the buildings scenario. The more you had

the greater your chance of good cards, did |I say simple. Colin's games are never as straight forward as capture this or that and this game was no different. At the end of the game each building was worth one playing card of points plus each building had a hidden special feature only revealed upon capturing, I hope you are keeping up because I wasn't.

Comrade Bill Gilchrist was the senior commander of the Vichy forces. I was to advance on the right with my Moroccans (Goums) in their splendid striped coats while Bill took the legion up the left. I also had command of the rather splendid 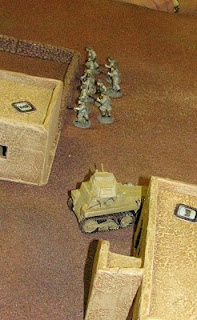 Bill had craftily picked the side with 4 buildings rather than 3 to give us a better start. We quickly occupied these while the dominion forces captured the 3 in front of them. My armoured half track car thing pushed to the middle buildings, it did looked incredibly mean.

Well appearances can be deceptive, on the first turn of firing I discovered that it was crewed by Mr Leclerc and the rest of the 'Allo Allo' crowd. My driver had lined up a beautiful enfilading shot down a line of 'crack' commandos, unfortunately it would seem that gunner better at polishing his gun rather than using it. Things only got worse next turn as my not so fabulous armoured thingy pulled up in front of their armoured thingy. The gunner discovered that it contained some kind of hero, one of the hidden treats in the buildings. Being a hero is no good if someone shoots at you so I had to take a morale check. As you are maybe guessing Leclerc was not for shooting. Fortunatly British were also not the best shots. 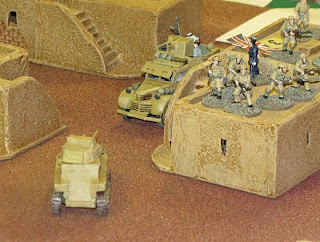 Things were going rather better for the Goums, they had reached the middle buildings and were in the process of occupying one of them. Unfortunately those, should have been so dead, commandos were doing much of the same. Some talked of sharpening knives on cobbles, others buggering the blond haired commandos, unfortunately it was all talk. The rather sinister 'Ray' had somehow magicked up some Aussies to occupy the last of the building in the middle and it was my Goums who started to look like they were buggered. The Aussies fixed bayonets and charged in, things were not looking good. 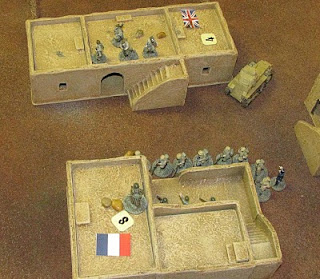 I had hatched a cunning plan, a quick look across the field revealed that my armoured thingy could swing round and take the Aussies from behind while the Goums disengaged from the front. The plan was based on Leclerc doing some shooting I should have known better, I was getting suspicious Leclerc sympathies. Safe from the attentions of Leclerc those Aussies set about the Goums, a few thrusts later and it was all over the Goums reputation in tatters. 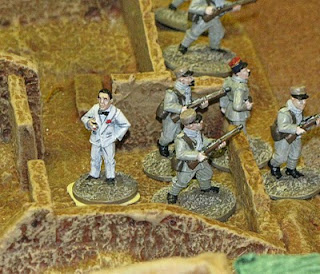 in the buildings. These legionnaires had located Rick in one of the buildings and decided to use him as a hostage based on the good behaviour of the British. We had also managed to rustle up some reinforcments in the form of some legionaries and more Goums. The legionaries took up position in the middle while I pushed the Goums up towards the middle buildings.

The second batch of Goums charged the Aussies in the building keen for quick bit of bayonet work themselves. The Aussies excretions had left them knackered and it did not take long for the Goums to finish them off. Flushed by their success, instead of occupying the building their none to cleaver commander decided to launch an immediate bayonet charge on those pesky commandos. The sinister 'Ray' picked up his dice and ended any future involvement of the Goums, I could have cried but it's only a wargame. 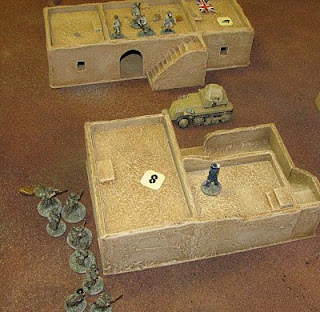 I was left with the 'I couldn't hit a barn door' armoured thing, great. Fortunately Comrade Gilchrist had 2 full units left and they were 'le Legion.' Being of mainly German extraction probably helped their shooting and the last of the commandos perished under a fail of fire. The game however was drawing to a close and those legionaries were not occupying any of the central buildings. The cards came out, it was decision time. A few good cards would have helped. To cut a long story short, we lost and so did Rick. 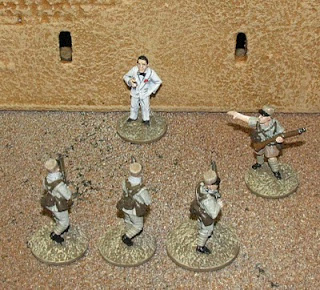 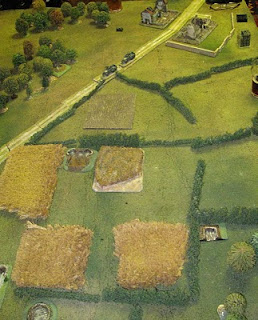 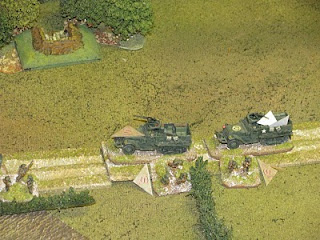 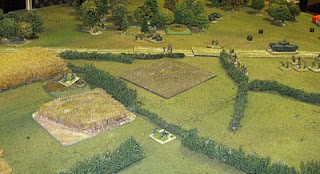