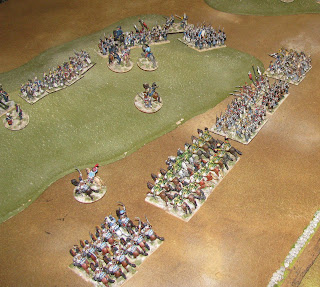 This was a fictional engagement dreamt up form the cerebral depths of John Glass's mind. The premise was that after the battle Albuera on the 16th May the French troops under Marshall Soult were retiring to the south. The British has mounted an uncharacteristic aggressive pursuit of the French forces. Our game has an Allied command consisting of Spanish, Portuguese and British troops catching the French rearguard in an extremely disadvantageous position. The French are defending a two long hills running across the table, at their disposal was 2 brigades infantry with a light cavalry brigade. The allies had 5 brigades of infantry and 3 brigades of cavalry. The ace in the allied deck was a flanking force consisting of the Portuguese with 1 brigade of infantry and 1 of cavalry. The objective of the french was to exit the table at the village of Mierdalona with 75% of their force intact. The allies had to destroy 50% of the French force.

As the first turn kicked off the French desperately trying to reorganise to face the Portuguese to their right rear this was the flank commanded by Brian Phillips it was looking like a sticky wicket. I had the other infantry brigade and the light cavalry. While the infantry held the cavalry blundered but fortunately went to their right, it could have been a lot worse.

The allies rolled on with what seemed an endless supply of troops, what had looked like a holding action was altering to a headlong flight and this was turn one. I have to say myself and Brian were starting to get a wee bit concerned. 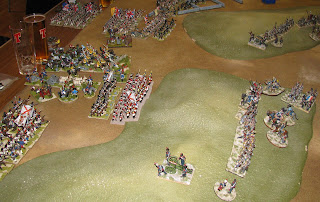 More frantic French manoeuvring and cursing of the dice filled their turn as lady luck was definitely missing. The allies poured forward some good rolls sped things along the Spanish in particular shutting down the range. John was getting some assistance from a young boarder by the name of Ewan, he seemed to have come supplied with well trained dice. His Spanish Irish were beginning to threaten the French left flank. 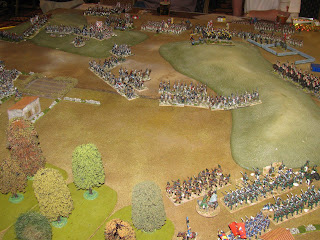 Some tough decisions were being made in the French camp regarding which battalions were being sacrificed. The Portuguese had managed to cut across a third of the French rear but instead of pushing the advantage they began to attack the rear of the French flank assuring its destruction but leaving enough of a gap to slip the rest of the command out. 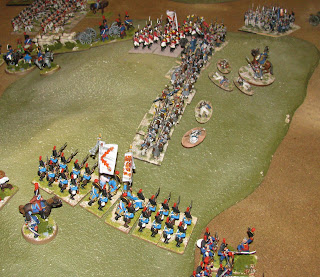 Back on the other side John had charged in with his two leading battalions in the ensuing melee one of them broke but the other managed to keep fighting. Ewan's Irish had slipped round the flank of the exposed French battalion and sent them reeling down the hill, the French retreat was starting to look like a real mess 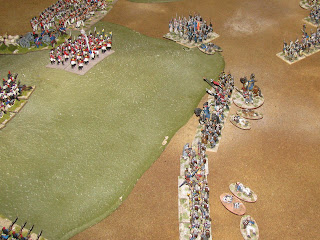 Some scrambling and a wee bit of good fortune for the French managed to resurrect some form of French defence. This should only have been a restbite but some poor Spanish command dice, (young Ewan had left) allowed the French a breather. 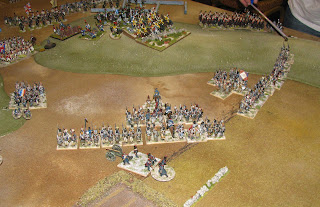 While all this had been going on the allied cavalry had swept forward, a few sacrificial squares were detached with the hope of distracting some of them. 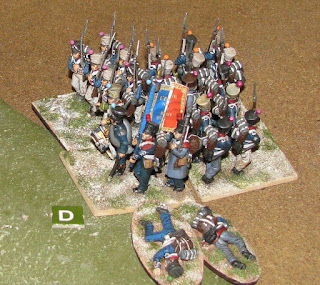 The cavalry crashed into the rear of Brian's battalions, they had failed to turn through some really bad dice. The first one evaporated in a whirl of horse flesh, the rest of the regiment looked doomed. We had however run out of time as usual Blackpowder let us play a fast and enjoyable game which even newbies can pick up within a few turns. The game had been a real command problem for the French and we should have started running sooner. 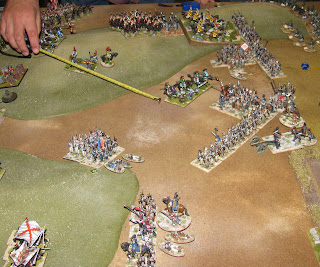 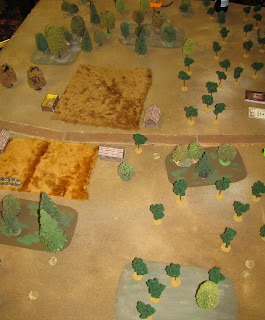 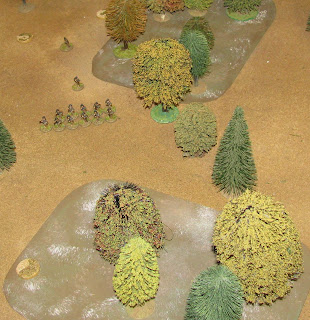 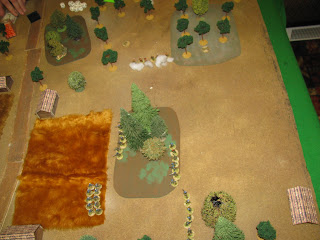 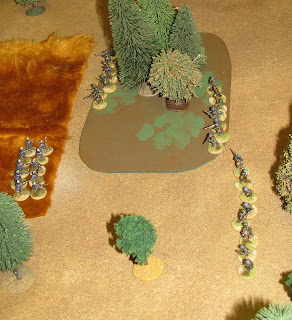 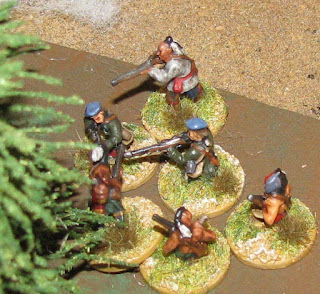