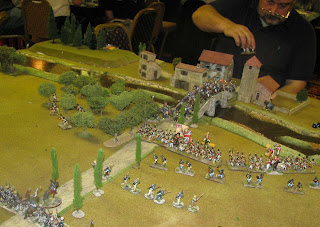 The premiss for this scenario was that a small force of British had secured a bridgehead over a secondary river crossing. The French were racing to contain the bridgehead and then to eliminate it while british reinforcements rushed to secure and expand the crossing. The French were commanded by myself and Bart, while Angus had the British. We were using General de Brigade 3 which was a bit of a change. 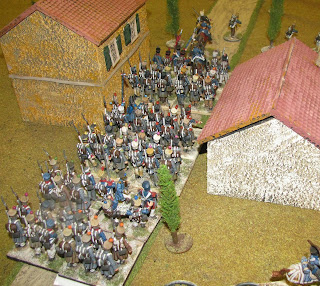 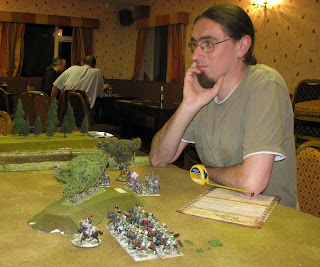 The game got under way with the French making a general advance towards the British positions. Due to an inordinate amount of whining from the British side about it being an unfair that the French got all their troops on the table, the British were allowed to receive their reinforcements immediately. This was followed by the artillery being fortuitously at the front of the column. Only bad dice on Angus's part stop this game turning into a farce.


The fortuitous artillery wheeled off the road and went straight up the hill behind the town there was a bit of whining that they would not reach the position in time and this was all a monstrous plot until it was pointed out they could move twice as fast at that distance from the enemy. The British cavalry trotting behind the artillery had poured over the bridge and were now moving round onto the flank. 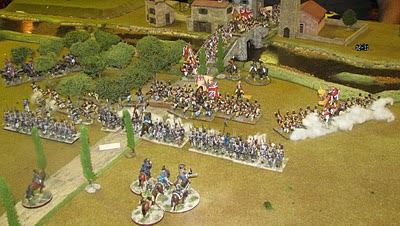 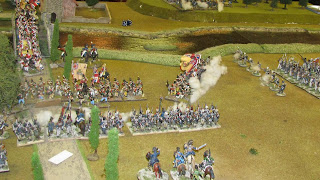 The French began their assault on the bridgehead from the front after shaking out into line. The flanking attack was now flanked in turn by the British artillery on the hill, some bad rolls from the guns saved the French from too much pain but the attack was already beginning to fragment.

With British reinforcements pouring over the bridge
the French were going to have to do something very quickly. As they began to develop the attack on the orchard at the side of the bridge to try and flank the British line. The initial fighting in the orchard was quick as my skirmishers chased off the opposite numbers. The back of the orchard however was filling up with British infantry. 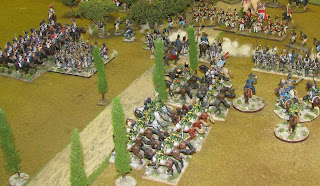 The British cavalry debouched form the orchard and as they formed up the french flank battalion formed square. They executed a sharp charge but were driven off. The French Cavalry swept round the square and charge home but were soundly thrashed and driven backwards.

At this point a veil was drawn over proceedings as time had run out.

I did not like some of the changes made to General de Brigade 3, while keeping the bean counting element with calculating each 10% casualties, the firing has been toned down. This makes units incredibly difficult to break down, with the rules being generally quite slow we are never going to get to a resolution on a club night. Artillery has also has become rather ineffective batteries seem to hand out one casualty a turn on average. The melee still has some strange casualty resolution with it calculated by number of figures, infantry squares will always take casualties from cavalry. 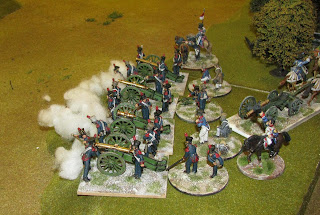 On a separate note - I like to play games that are not straight up points fights and this requires some form of scenario and some umpiring decisions. My personal feeling is that a scenario should flow like a story, with judgements being made to speed up or slow down the arrival of reinforcements. While some players will put up with their lot and try to make a fist of the situation, others will whine and moan that it is all so unfair. 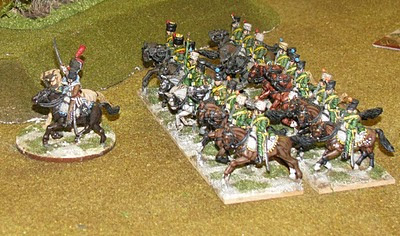