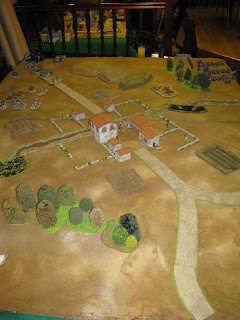 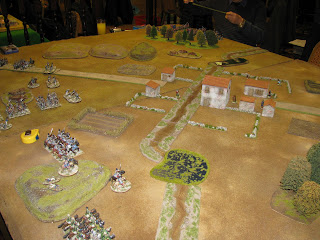 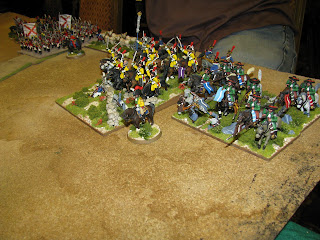 This is nothing to do with Córdoba but it sounds suitably Spanish. This was a fictitious engagement set in the peninsular involving French and Spanish with a small British contingent. The Spanish force supplied by John Glass, consisted of 2 small brigades of Infantry and a light cavalry brigade. Bill Gilchrist supplied and commanded an attached British Infantry Brigade. The French consisted of one large Infantry Brigade and a Cavalry Brigade, I commanded the cavalry while Bart had the infantry. 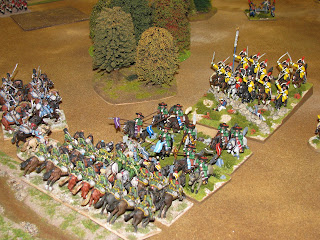 The battle started with French initiative, the troops started rolling forward heading towards the village and the ridge on the left. Things were not so steady on the allied side, the Spanish cavalry command with the bit between their teeth launched across the table at the French cavalry. Their commander had failed to use the magic word charge and instead had said engage so they pulled up short in front of the French cavalry. The French cavalry pulled back to enable a flank charge from the Hussars. The ensuing combat was a win for the French, the pickadors fleeing the sceen however the chasseurs took 3 casualties enough to make them shaken and they pulled back behind the stream. 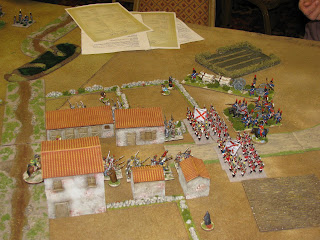 The 64e Linge reached the village sending 2 battalions in while leaving 1 in reserve behind the village. The supporting artillery moved round the side of the village. The Spaniards must have had a lot of Paella for breakfast because they were very keen on getting stuck in. Without any preparation the Spaniards Irish battalion went straight in. With predictable results they disintegrated reducing the birgide by a third at a stroke. A rather less than happy Spanish commander looked to his right for the British relive some pressure. 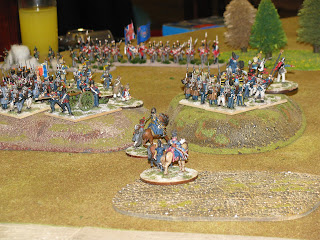 The 27e Legere had taken the taken the ridge line and was preparing to receive the British assault. After much cajoling from the Spanish commander, talking about honour and the like, the British peeped out of of the wood looking rather sheepish. A lot of manovering took place resulting in the British forming line at long range a few rounds of fire resulted in not very much. 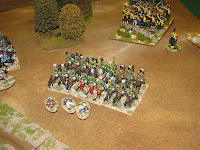 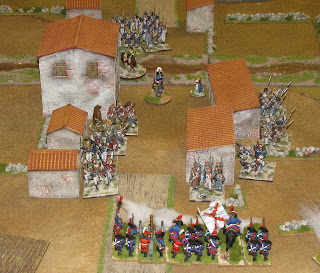 The Spanish now set about reducing the defenders of the village using artillery. In several rounds of fire the French battalion on the right in the picture broke and routed from the field. The Spaniards did not have a unit that was able to exploit this so it looked set for the French reserve to reoccupy the village. Well how looks can be deceptive in a comedy of dice the next few turns both sides failed command rolls to occupy the village 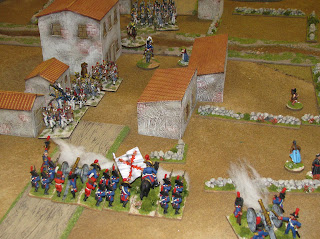 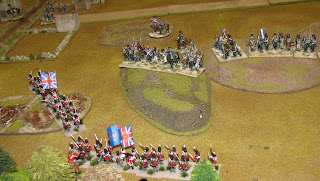 The French on the ridge to the left finally were taking some casualties so Bart pulled them back to sheltered ground. As our reluctant warrior now looked to exploit the opportunity disaster struck, the British battalion on the right disintegrated leaving the remaining two in an exposed position. 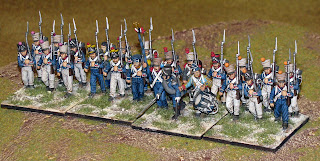 On the Spanish side things were not much better for the allies, having received reinforcements they had looked to push into the town but the dice drama was not over as they stalled in front of the French artillery. Finally the french resere made it into the village and the battle was as good as over.

It was a close run thing, it really came down to the race into the buildings. Once the French won that it would have needed a concerted effort to get them out.


You may have wondered what happened to the cavalry combat well not much after the first few rounds both sides were blown and really had no impact on the rest of the game. 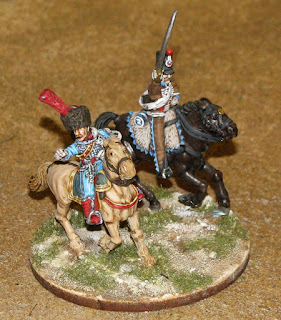 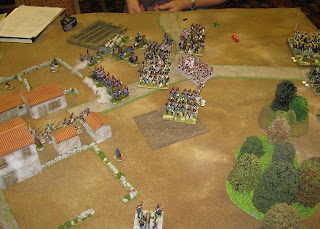