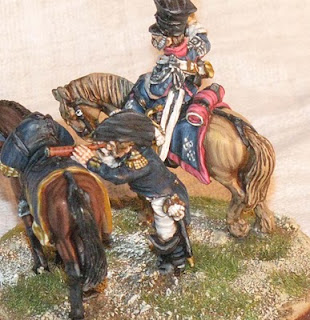 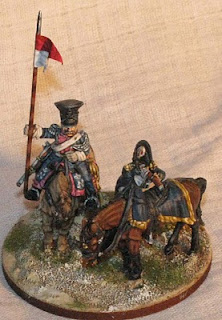 I am in a real napoleonic kick at the moment. I have just finished an imperial adjoint with guard polish lancer escort.
Posted by Dougie 1 comment:

This game was taken from one of Charles Grants scenario books.

The premise was that the British had taken up a strong position along a ridge line expecting the main French threat to come from the south east. The French however had placed a screening force opposite while sending the bulk of their force on a flanking march to the south east of the British position screened by a low hill and some woods on the eastern flank of the British line.

The initial positions had the French emerging form the wood on the flank of the British positions. The French infantry were in echelon to the left with the cavalry covering the right flank. The cavalry brigade consisted of 5th and 16th Dragoons, the 16th Dragoons tried to catch the 16th British light dragoons in the flank. The British managed to change formation and face the charge but were swept away in the ensuing melee. The Dragoons pulled up with exemplary discipline
Posted by Dougie No comments: