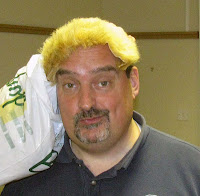 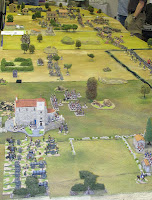 This was a Blackpowder game played about this time last year. It was a massive AB1 event up at Lundin Links in Fife. The scenario was devised by Bill Gilchrist and played over two tables. The larger one represented the main Allied attack against main French position. The smaller table was the allied attack on the French right flank some way to the west of the main battle, centred on the village of Gamara Mayor.
The main French commander was Jim Loutitt while the Allies were commanded by Angus Konstam, although his Wellington impression left a lot to be desired.


I was plonked on the smaller table with Derek Hodge, Dax Robertson and Chris Henry. Myself and Derek commanded the French. Dax commanded the British while Chris had Spanish/Portuguese. The brief for the French was to prevent the allies securing any of the bridges.These two pictures go side by side and show the main action as far as I was concerned . The picture on the right is Gamara Mayor and one of the all important bridges. On the right shows the road leading to the second bridge with Dax's highlanders advancing menacingly forwards. 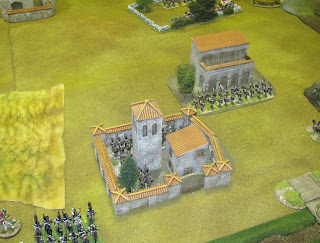 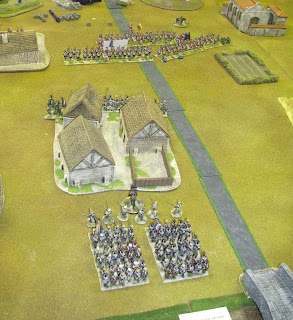 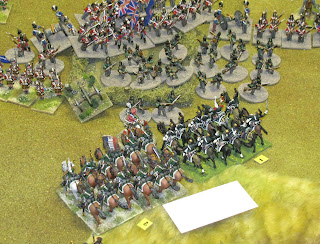 The French deployed in the villages, 1 infantry brigade in each. 1 Dragoon brigade was placed behind the gap between the villages while light cavalry and light troops held the right flank. 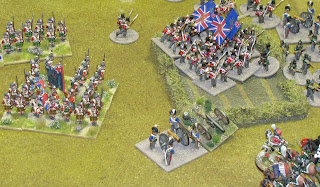 The British began with a general advance across the board and soon began to take a few casualties from artillery. The 95th rifles surged forward and soon began to lap round the village on the left threatening some French guns on the edge of Gamara Mayor. In an attamt to delay this I sent my Dragoon Brigade up to chase them away. This turned into a bit of a fiasco as the 95th legged it and the supporting infantry formed square backed by two batteries of artillery. My prize Dragoons took a pounding and had to pull back without achieving much. 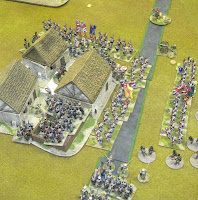 With the threat of the cavalry removed the Highland brigade enveloped the village and prepared to assault. I pulled on of my reserve battalions from behind the village out and placed them to the highlanders flank. I sent the other on into the village in anticipation of the assault. 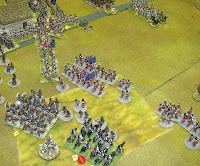 I didn't have to wait long, to the skirl of the pipes the highlanders came tearing in. Things however do not always go as planned, villages in Blackpowder are incredibly difficult to take unless you prepare properly, the highland assault came to bloody end. The reformed French Dragoons came crashing in again and sent the British reeling backwards breaking a couple of battalions. At the end of it the British were in a real mess and were desperately trying to reform their line and scrabbling about for reinforcements. 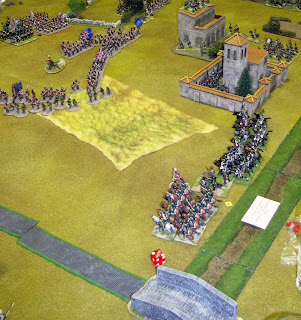 The British now settled down to a more methodical approach after a bit of a chat about the tactics of taking a village. Leaving the bloody debacle of the other village the British and Spanish now concentrated their attentions on Gamara Mayor. Positioning their artillery to play a prominent role in the assault, the Allied Infantry steadily enveloped the village making sure not to expose themselves to Dragoons lurking round the corner. 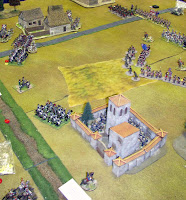 In a string of turns they were steadily rustling the French out of the village. Weight of numbers was now beginning to tell as the French reserves were running dry and there was no infantry left to launch a counter attack to retake that part of the village. Our main commander Marshal Loutitt had committed the French reserve on turn two on the main table, so the cupboard was empty there. Fortunately for the French night was coming and the Allies had not managed to cross the river and cut of the main French army. We had it seemed scraped a tactical victory. 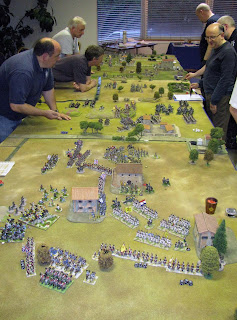 Things in the main game were not going well for the French, despite the protestations of the main commander who seemed to view the looming crushing defeat as some kind of tactical draw. The entire French right flank was fleeing backwards while the Allies were pressing elsewhere. 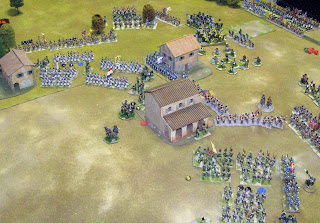