This was a American War of Independence game where the scenario was card driven, using Blackpowder rules. Card driven I hear you say! Well one of our new members a German lad by the name of Martin had come up with a universal idea to generate scenarios using a card system to give a quick but influenced game. It proved very interesting the cards become a game in themselves as we experimented with a few ideas.

We played out three card games,
The first had a dug in American brigade on clear terrain with a small stream with a surprise attack. Both sides had various levels of ammunition depletion and each had some extra troops.

The second was an incredibly woody, hilly table with terrible weather.

The third was an open table with fog and ammunition depletion for the Americans along with a spy in the ranks and the British had extra troops. 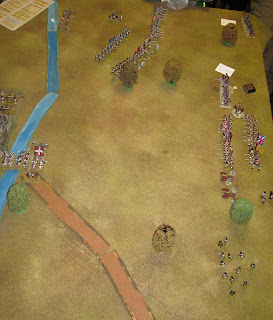 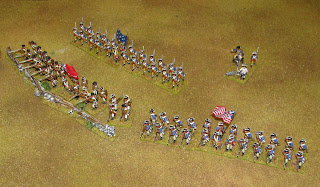 I foolishly plumbed for the first one as it sounded quite interesting. As we rolled up the table the stream ended up in front of the American lines while they had their dug in brigade on the other side of the stream on the left flank. My reading of the scenario was that the British general had sniffed an opportunity to attack and destroy this isolated American brigade, the Americans had however got wind of the British intentions and had raced another brigade up to counter attack the British. 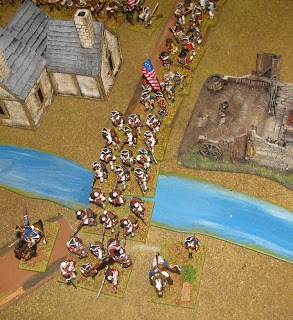 Well the game did not start too well for the British, I need to get across the table and seal off the bridge to prevent the American reinforcements from deploying too quickly giving me time to roll up the isolated brigade. This to me seemed quite obvious but not too the lads on the ground who decided to wait around for a turn to see what happened. As it happened things were not so good in the American camp as the troops racing to the rescue decided to have a go slow and barely crossed the bridge on the first turn.

Considering the situation demanded speed and panache both commanders were found wanting, well their dice at least. The next turn saw the British cautiously advancing it was looking more like a trap every minute the lead highlanders came under fire from the dug in brigade losing their crack status immediately along with a casualty, I think I rolled my eyes at this point! 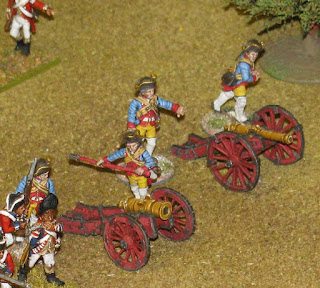 Well it didn't get much better for the British the next few turns saw the attacked reduced to a shambles as the Americans couldn't miss and the British couldn't save. I hadn't even started attacking and my brigade was in a shambles as I tried to sort it out and regain a shred of wargaming honour the relief force got a couple of rapid moves and managed to shake themselves out into line. My artillery was having a hit or miss day but all in all was the stand out unit managing to put some rebels to flight. But it was all too little too late, the British were hopelessly compromised and when the Indians are getting involved you know it is time to run. 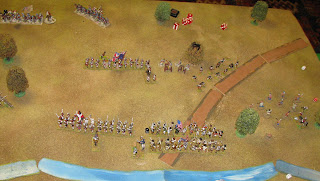 This was a fun game and the card certainly made for an interesting scenario. Better dice would have helped but don't all losing wargamers say that!