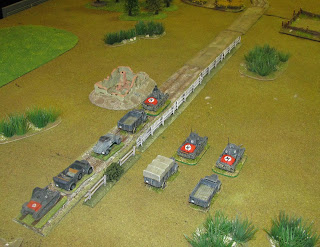 Mga is an urban locality in Kirovsky District of Leningrad Oblast, Russia. the Germans had captured it the day before but had been driven out by a strong counter attack. As day broke on the 30th August 1941, Mga was the last rail line out of  Leningrad and so our game begins. 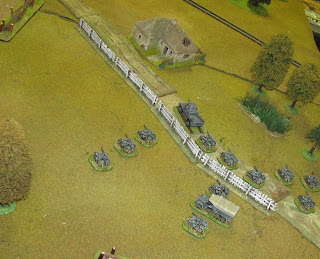 The Germans were commanded by myself and Hugh with the Russians commanded by Colin and Bart. The Russians had some barbed wire on the outskirts of Mga but little else in the way of defences. The Germans were offered the choice of the two roads leading to Mga from the west and the south. The Motorcycle battalion with an attached armoured car, commanded by Hugh, approached from the southern road while the main force of 2 infantry battalions with 2 armoured companies approached from the west.

Hugh's troops encountered the first signs of resistance as they moved up to the small farm complex. Getting into the Blitzkrieg swing of things, Hugh swept past the farm and on to the rail line ignoring all resistance on route As the motorcyclists bumped over the train line, Russians began popping like mushrooms on a damp morning. It was beginning to look like von Hugh's death ride. The Regimental commander, peering agog through his field glasses, could be heard muttering "dummkopf" under his breath. 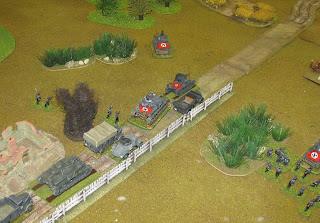 The main force pushed on towards Mga trough some harassing mortar fire. Conscious of the wood on the northern flank a small screening force was detached. Von Hugh's death ride had revealed a Russian infantry battalion in the fields directly to the front. As the uints moved up to engage the northern screening force located another infantry battalion in the wood and the fields behind. In the next few turns artillery strikes backed up by tank and infantry fire eliminated the defenders in the fields with no losses. 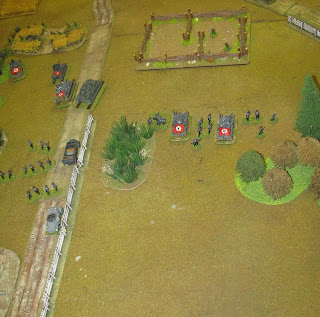 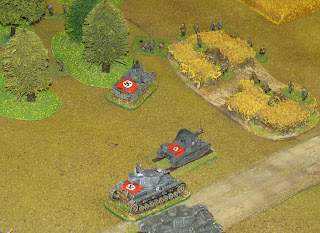 The defenders in the woods meanwhile were busy chucking Molotov cocktails at the pz38t parked outside. Possibly having drunk all the "Molotov"  they were quite unsuccessful. 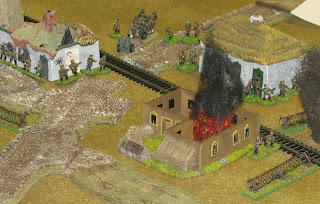 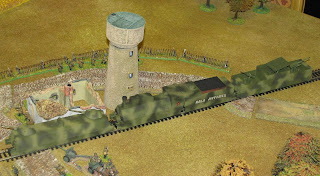 Our umpire had been busy rolling dice whenever he remembered and eventually the result rolled on in the form of a rather impressive armoured train.

The German forces began to focus their fire onto the town and the train. The front of the train engaged the German tanks it failed to hit anything but the return fire was much more accurate and knocked out the front turret. Realising that the train was covering an a/t gun on the road, it rolled forward out of the town. 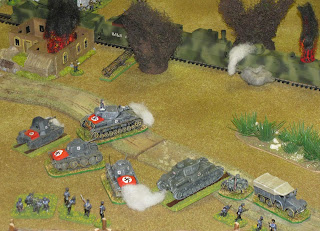 As the German tanks charged the train to get into close range for maximum effect  the Russians sprang another surprise as 2 companies of light tanks raced on from the south in the ensuing fire fight the train and 4 Russian tanks were knocked out for the loss of one tank and a few damaged.

Time had caught up with us and the game drew to a close. The writing was on the wall for the Russians and it would only be a matter of time before the Germans cut the last rail line to Moscow. 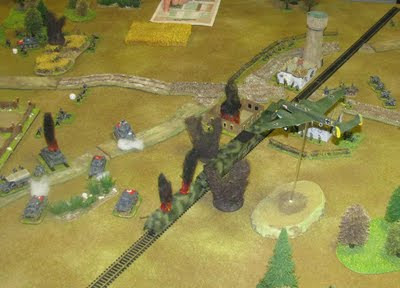 The are on ebay here 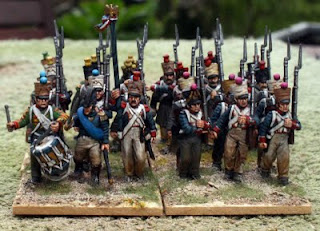 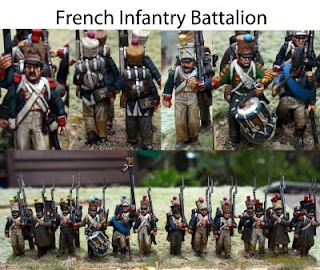