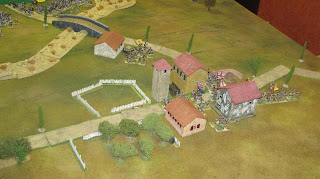 This was a fictitious engagement set during the Peninsular war in the summer of 1813. We used blackpowder rules with a couple of amendments. The premise was that the two sides had been sparing in the local but things had settled down and the troops had been spread out a among the local villages. The French had learned that a Brigade of British troops were quartered in the small hamlet of villa Daxa in a slightly exposed position. A French division under the command of General Villatte was ordered to take the village. 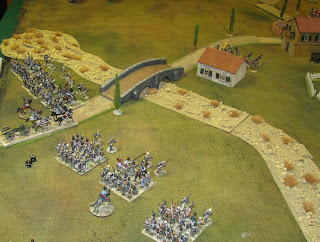 Myself and Bart commanded the French while Dax gave his British and outing. The British started with a Brigade in the village and promise of support. The French arrived down the two roads approaching the town  I had Pacthod's brigade-27th legere and the 64th linge. Beaumont's light cavalry Brigade - 2nd Hussars and the 5th Chasseurs. Barts had Puthoc's Brigade - 94th and 95th linge, arriving on the road behind the river. Delebele's Brigade - 5th and 16th Dragoons, was in reserve. 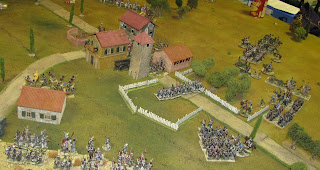 The plan was simple, I would launch a few pinning attacks on the village while Bart flanked the village for the main assault. The first turn saw the some rapid advances but a lot of nothing as troops refused to move. Bart's first problem was a small farm defended by a Militia battalion. Some poor command dice reduce the attack to a crawl as he tried to get into position. The lead Battalions mangaed to get themselves disordered by some lively musketry from the farm. 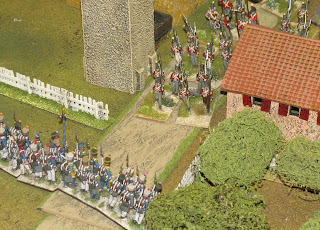 Meanwhile I had raced up two guns to firing positions by the village. Myself and Dax have had previous with village fights, I had given him a bit of a bloody nose at a Vittoria re-fight last year. Now the positions were reversed and he was looking to do the same to me.

Assaulting a village under Blackpowder is a real challenge, you need to combine artillery with massed infantry assaults and keep a reserve. Having played Blackpowder a few times it would seem to me to be a game of reserves. The influence of fresh troops can be decisive as it is very easy for troops to become quite worn with out doing very much. 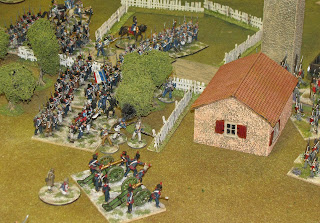 Back to the action, the French light cavalry brigade pushed forward to engage some light Dragoons lurking behind a wood. In the ensuing melee the 2nd Hussars were driven back and nearly off the board by the light dragoons. This side of the table then settled down with a string of failed command rolls for both sides.

My guns battering of the village was taking its toll even though Dax had cycled his battalions they had both taken a pasting. I prepared for an assault. 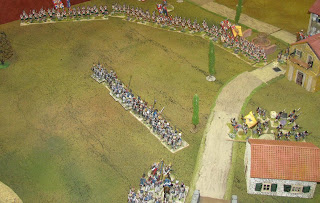 Things were not going so well for Bart on the other flank, his lead infantry kept getting pinned down by the militia battalion. In response he swept two battalions round in a wide move round the rear. As he prepared to swing in on the rear of the farm, a thin red crescent of Hairy Highlanders formed around them. The British reserves had arrived and on some amazing command dice. In the ensuing two rounds of fire both battalions were wiped out. This threat to the flank change our priorities some what and a new plan of a delaying action by Bart while I launched a full blooded directed assault on the front of the village. I love it when plans fall apart. 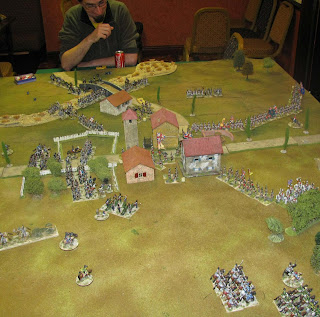 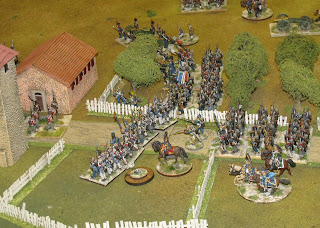 Things went from bad to worse, a quick assault on the village was what was required but could I get those command rolls, no is the short answer. 2 turns of milling about in front of the village was about all my command was capable of. The Gunners were performing heroics on the flank as they kept up the fire while under an intense fusillade from the village and a supporting battalion. 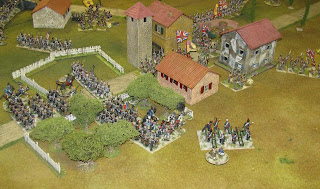 Bart had managed to stabilise his flank, in quick succession he captured the farm and then dished out some pain to the Hairy Highlanders. The capture of the farm gave new impetus to the French attacks or lack of and finally the dice said we could advance. In a couple of rounds of fighting the 27th Legere drove the British out of the front of the village. The game was poised on a knifes edge and unfortunately we had to call it a day.

The game was declared a draw. The British would probably need more infantry to retake what they had lost but with a bit of re-jigging of the line they should be able to put in place enough reserves to hold the remainder of the village, assuming the French did not get lucky with a quick assault. For the French only a rapid assault would have a chance in the short term otherwise they too would need more infantry and guns to launch a deliberate assault. So ADCs were despatched to the rear and the weary commanders retired to the local taverna to discuss the days events. 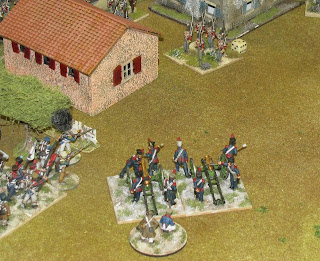