The Battle of Emsdorf 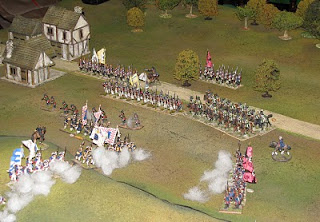 Played Black Powder for the second time last night down at my local club in Edinburgh. The battle chosen for the occasion was Emsdorf 14th July 1760. The protagonist consisted of an Allied command of Hanoverian, Hessian and British forces ranged against German troops in French service.
Marburg which was the French main supply depot for the army operating towards Kessel approximately 80 miles to the northwest. The French Army had pushed the allied force up to Kassel and had halted to sort out their supply arrangements before continuing their advance. On the night of the 14th Allied intelligence had received information that the french field bakery was located at Ziegenhain some 25 miles NEE of Marburg covered by a large French Brigade commanded by Baron Glaubitz.

Looking to slow the French down the commander of the Alllied force, Ferdinand of Brunswick ordered a small combined arms force based at Fritzlar, under the command of the Hereditary Prince to intercept this force and destroy it.

The hard marching troops of this flying column raced south on the morning of the 15th. Arriving at Trysa in the evening, 2o miles from their start point and only 2 miles from Ziegenhain, his scouts reported that the enemy was actually camped at Emsdorf 10 miles to the west. The hereditary Prince made camp that night before setting out in the morning for Emsdorf. Arriving at the outskirts of the village at midday on teh 16th he found the french were settling down to have lunch. There were no outpost sited so the hereditary prince decided to split his force to surround the enemy and cut off any retreat. 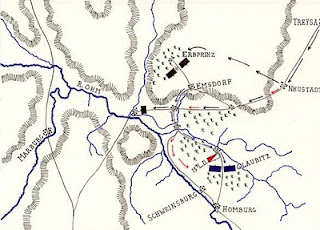 The positon of Emsdorf covers the main approaches to Marburg sitting on a slight rise looking south east over the main valley running 30 miles north to Kessel.

The French had encamped beside the village of Emsdorf oblivious of the approaching allies and sat down to drink their beer.

Pushing through the woods to the south of Emsdorf the Prince struggled to get his attack off to a quick start. The lead Hanoverian Battalion had great difficulty in shaking out upon leaving the cover of the trees. An alert sentry duly spotted the conflagration and raised the alarm. The French now alerted began to from line of battle as they began to shake out into L formation to cover the converging forces. Von Luckner who had been moving his forces in from the west spotted an opportunity to strike the exposed flank of the southern side of the french L. 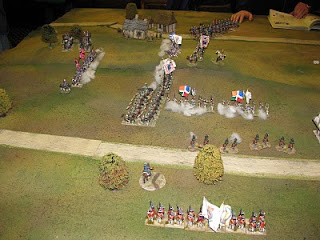 Von Luckners Hussars launched a sharp charge, the terrified German mercenaries broke as the hussars bore down on them fleeing up the hill in confusion. This retreat only uncovered the flank of their sister battalion in a whirl of pelisses and sabers it was all over the German battalion ceased to exist.This charge threw the French into confusion their formation was a shambles and nearly half of the available infantry was out of commission.Glaubitz hurriedly moved his reserve down to plug the gap. He was fortunate the Allied attack was poorly coordinated as he formed a semblence of a line before the allied infantry could attack.
(Looking north from the Hereditary Princes position. The village of Emsdorf can be made out in the back ground. Von Luckners Hussars are charging into the still forming French.)

The main allied infantry force of 4 battalions now began its attack on the french positions at the base of the hill. A firefight developed along the line with the French getting the worst of it. Some of the mercenary German battalions were begin to edge back. Glaubitz decided to reform his line further up the hill and pulled his units back desperately trying to rally them. At this point the Hereditary Prince launched the Hanoverian battalion Von Marschall into a spirited charge up the hill. 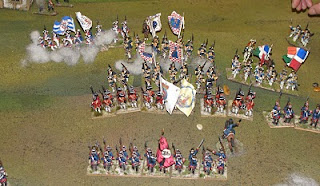 The German mercenaries fired a ragged volley before disintegrating back through the battalions behind. The Hereditary prince checked the Hanoverian's before they could get out of control. The allied brigede paused reformed and continued its advance after the retreating German mercenaries.
On the other flank the 15th Light Dragoons tasked with covering the allied left flank, had formed on the ridge line looking down towards the village of Emsdorf . French light troops were seen to be occupying Emsdorf while the Bercheny hussars were maneuvering in the fields behind the village. The colonel of the 15th had placed the unit in an exposed position and the fire from the french light infantry soon caused disorder amongst the ranks. The English colonel decided to retire behind the ridge line, this simple maneuver was turned into a disaster as the colonel toppled from his horse the regiment broke and fled from the scene. 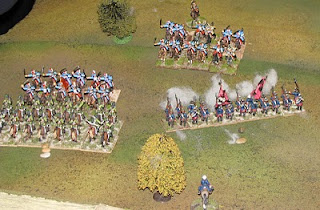 The French Hussars raced across the field to take the ground vacated by the dragoons. Von Luckner witnesed the collapse of the allied left as he tried to form a response the french hussars crested the rise of the hill. The French hussars looked set to sweep all before but they seemed content to sit on the hill and wait. This pause allowed Von Luckner time to reorganise his line. He then ordered his units to close up with the french at this point the french charged down the hill. The first half of this was shot off by the Hanoverian battalion. Von Luckner's hussars counter charged the approaching french horse. A swirling melee of pelisse's, saber's, mirliton's, and busby's developed both sides taking heavy loss. 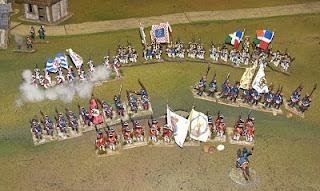 The German mercenaries retreat halted at the base of the hill to the west of Emsdorf. A massive firefight developed along the line as the allied battalions pushed forward to make their numbers tell. The fragile morale of mercenaries began to crack and the efforts of Glaubitz to rally them were in vain as the line began to disintegrate before his eyes.

As the French infantry teetered on the edge of oblivion their Hussars finally broke Von Luckners hussars. Could they snatch victory from the jaws of defeat with a timely charge? Inertia again seemed to grip the French Cavalry commander, finally he pushed his units forward but it was all too late the last of the mercenary battalions had collapsed and the Hereditary Prince had closed the door. 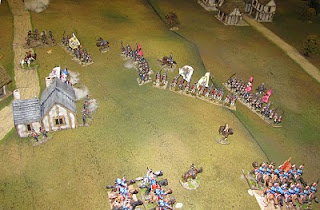 With his T crossed the French Hussar commander retreated and was last seen muttering about a poor ground. Glaubitz looked slightly bemused on his trip to the prison camp muttering about his colleagues lack of aggressive spirit.

In the real engagement the Allies were amongst the French before they could react In a quick series of actions the french began to retreat. The persuing cavalry especially the 15th light dragoons put in a couple of telling charges capturing one battalion. The frennch managed to beat these attacks off but were finally cornered and forced to surrender. As a by note the French Hussars ran very early in the battle leaving their infantry.
Posted by Dougie